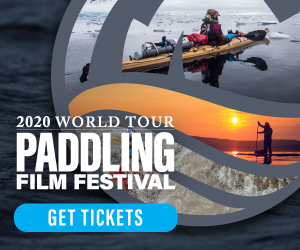 Advanced tickets will be waiting for you at the door if you purchase over the phone or online. Please bring some form of ID to claim your tickets

The Paddling Film Festival kicks off its 2020 world tour with the Premiere on Thursday February 20th 2020.

The Complete Paddler is proud to host Rapid Media’s 15th annual Paddling Film Festival that showcases some of the best paddling films in the world. This international competition begins in Toronto, ON, hosted by The Complete Paddler, before beginning its year-long tour across the globe and screening to over 30,000 outdoor enthusiasts and their families. The festival recognizes the best paddling films in a series of categories like best whitewater kayaking film, best canoeing film, best fishing film etc. It aims to inspire more people to explore rivers, lakes and oceans, push physical and emotional extremes, embrace the lifestyle and appreciate the heritage of the wild places we paddle.

On Thursday February 20th 2020 The Complete Paddler will be hosting the Premiere of the Paddling Film Festival at The Royal Theatre, 608 College Street Toronto, Ontario M6G 1B4. Doors will open at 6:30 PM for a 7:00 PM start.

The Complete Paddler and others will be donating a number of door prizes to be won as well as “Hot Ticket” prizes. Everyone who attends will be entered into the draw for the Door Prizes and Hot Tickets will be sold separately for $2.00/ea or $5.00 for 3. One hundred percent of the night’s proceeds will be going directly to The Duke of Edinburgh’s International Award, a charity designed to challenge youth around the world to develop positive skills and lifestyle habits.

Tickets: $14/Advance or $17/door plus tax. Advance tickets can be purchased at The Complete Paddler in person, over the phone 416 255 6905 or online. Your tickets will be waiting for you at the door if you purchase over the phone or online.

Advanced tickets will be available until 1pm February 20th.

For more information on:

Register for this Event

Sorry, there are no more spots available.

We understand that things come up and that you may need to cancel your spot in the course. We will gladly refund the cost of the course or move you to another date with open spots with at least 48 hours notice if you are unable to attend. Refunds will not be issued for lessons or courses that are cancelled with less than 48 hours notice.

Join our list and keep up-to-date on sales and events.
0